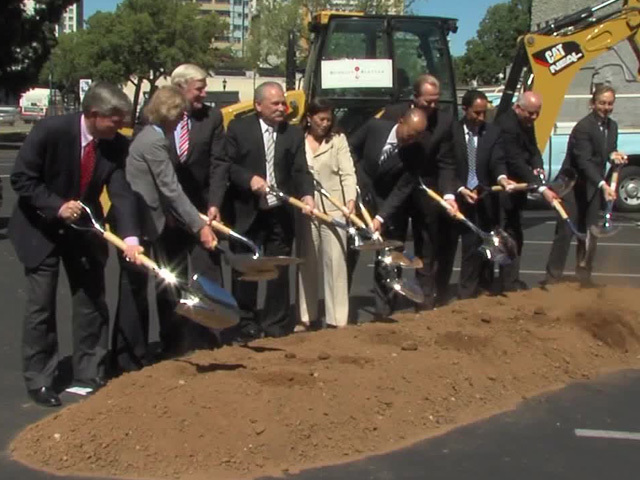 SAN DIEGO – After more than a decade of planning, a groundbreaking ceremony was held Monday for the $555.5 million Central Courthouse for the San Diego County Superior Court.

The building — the largest new courthouse in the state’s court construction program — will consolidate multiple facilities in the downtown metropolitan area, including the County, Family and Madge Bradley courthouses, which are seriously overcrowded, unsafe and inadequate for modern court operations.

Planning to replace the existing County Courthouse began in 1996, he said, noting that a bill passed in 2002 required counties to transfer responsibilities for court facilities to the state of California.

“It was a monumental challenge for all of us, but we never lost sight of the big picture and we were able to craft a plan that meets the needs of this growing region,” Cox said. “For downtown San Diego, this will be another gem in the continuing renaissance of our civic core.”

California Chief Justice Tani Cantil-Sakauye praised the leadership of the San Diego judges, politicians and court staff who made the new courthouse building a reality.

San Diego Presiding Judge David Danielsen said an earthquake fault running under the existing courthouse — which was built in 1961 — helped move the new building construction along.

“It is a great day for a great city and a great county and a part of a master plan of a great state,” Danielsen said. “We need a modern, safe and efficient courthouse.”

“It is the most dilapidated facility,” said Judge Joan Weber. “It was out-of-date before it even opened. It is a security nightmare.”

Weber was referring to the way San Diego County sheriff’s deputies move jail inmates along the same stairwells, elevators and hallways that the public uses.

Several judges also complained about the asbestos that fills the building.

“We had a pipe break about a year ago, had falls all the way down through the ceiling and of course that’s a disaster,” recalled Danielsen. “The next thing you know, there’s plastic up and asbestos contamination. It’s an older building, and it’s outlived its usefulness.”

There are also reports of mice and cockroaches roaming the hallways, which are cracked and deteriorating in spots.

The building isn’t ADA approved and there aren’t enough bathrooms. The bathrooms that are in the building are dreary at best.

“You ought to see the bathroom in my chambers,” said Judge Frederic Link. “My wife won’t go in there!”

Link, who is part of the Courthouse Project Advisory Group, said the new courthouse will be a “wonderful thing.”

“I want to be on the 21st floor, looking out at the ocean,” he said, laughing.

The 22-story building will include 71 courtrooms in 704,000 square feet and feature significant improvements in security, with a secure vehicle sally port for the transportation of in-custody defendants, as well as better safety and improved access and efficiency for county residents.

The new facility will utilize sunlight to optimize interior lighting. A three-story lobby atrium will connect to the nearby Hall of Justice, which will continue to be used for civil cases, via a pedestrian bridge.